GET TO KNOW THE BIKE HELMET LAWS BY STATE 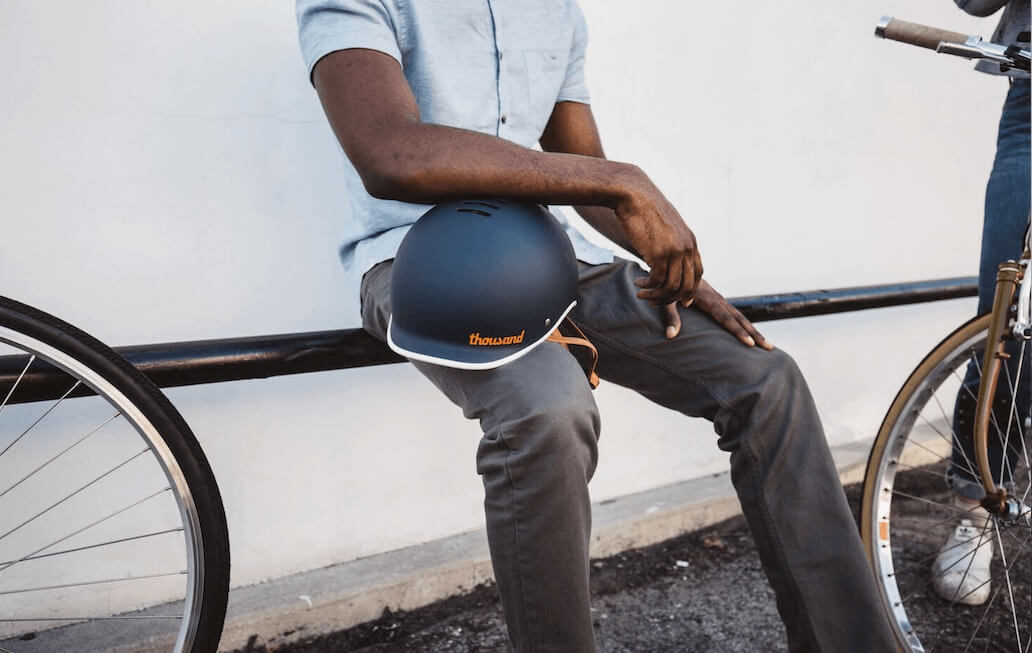 Bicycle helmets reduce the risk of serious head injuries in forceful impacts, but, more than half of Americans who ride a bike, skateboard or scooter don’t wear one. If you’re a seasoned bicyclist, you’ll know that there are lots of riders who opt not to wear a helmet. It’s one of those age-old debates that probably isn’t going to end any time soon — if ever — as long as there are bicycles on the road. In fact, we did a little digging into whether or not you should wear a bike helmet and the potential trade-offs.

Yes, there are laws in place that require the use of a helmet. But what exactly are the laws? Turns out, it’s not as straightforward as you might expect. There’s no one-size-fits-all federal bike helmet law, so that means they’re often determined at the state or local level instead. Whether you’re a long-time resident of your respective home getting into biking for the first time or a transplant who recently moved to a new city, it’s important to become familiar with your local bicycle helmet laws so you don’t get caught without the proper headgear. Such a confrontation could actually cost you in fines.

Below is a quick guide to help you and your family ride safely (and legally).

A handful of states have instituted statewide laws that require the use of a helmet while riding a bicycle or mountain bike or while cycling and skateboarding. These laws often target youth and hold parents or guardians accountable for their childrens’ safety. But, there are almost no statewide laws that hold adults accountable for wearing a helmet. Here’s a breakdown by age and state.

As you can see above, there are a handful of states with stricter helmet laws than others. Most of these laws apply to youth aged 18 and under. Unsurprisingly, the National Bureau of Economic Research found a reduction in youth bike-related fatalities by about 19 percent over the last couple of decades because of youth bike helmet laws. During this period, youth helmet usage improved by 20-34 percent. The downside was that bike riding among a youth population decreased by 4-5 percent. 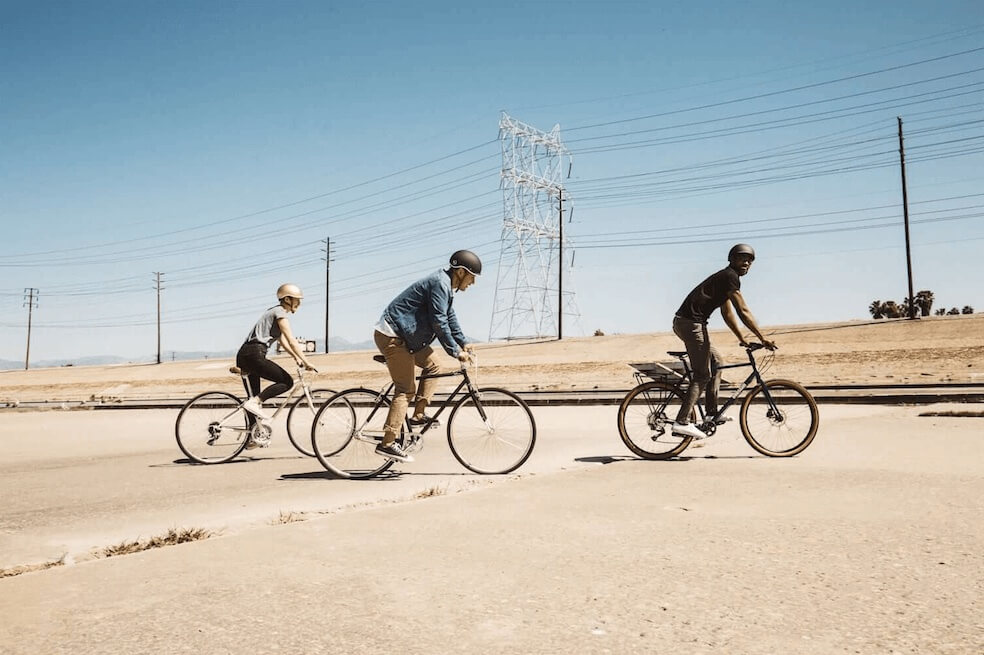 California (home of Thousand helmets) set age 18 as the legal cut-off point. Any 18-year-old or younger, regardless of religious belief or practice, must legally wear a helmet. It’s important to note that the youth helmet law applies to riding a bicycle on a street, bikeway, sidewalk or public bike path. It’s technically legal for a youth to ride a bike without wearing a helmet on private property (except sidewalks).

Keep in mind that it’s a €36.00 fine for getting caught helmet-less in California when one is required. A parent, guardian or the youth riding without the helmet is required to pay. Interestingly, in lieu of paying, California does give riders the option to use the citation as a “fix-it” ticket. Simply stated, show law enforcement that you have an approved helmet and completed a bicycle safety course to make the citation disappear.

Our neighbor to the north, Oregon, doesn’t have an adult bike-helmet law much like most other states. For those who are 16 years or younger, the helmet law applies to any place intended for travel by motorized vehicles or spaces open to the public (think mountain bike trails). Failure for not wearing a helmet? It’s a €36.00 fine. Unlike in California, a person 16 or younger is legally allowed to not wear a helmet if it violates a religious belief or practice.

In New Mexico, where places like Albuquerque have been ranked high on bike-friendly city lists, the mandate is youth and teens under the age of 18. New Mexico is the only state that requires minors to wear a helmet while riding all recreational vehicles like off-road vehicles, snowmobiles and ATVs. This law also applies to e-scooters for those who are 18 or younger. The penalty for not following the laws? Expect fines and traffic tickets.

If we head to the East Coast, New York City adopted New York state’s bicycle helmet law for youth. To get more safe riders on the road, the NYC Department of Transportation (DOT) holds annual events where it fits and gives away official New York City bike helmets free of charge to kids. According to NYC DOT, working cyclists of all ages must wear a helmet. Think bike messengers and people who deliver food by bicycle.

This year, there has been some chatter around making bike helmets required for bike-share users of all ages in New York City. It’s been met with much contention with advocates, who are against the requirement, fighting for better protected bike-lane infrastructure instead.
Despite having statewide helmet laws or not, some cities require all ages to wear a bicycle helmet while riding. These are the cities:

Interestingly, while both Washington and Missouri haven’t implemented statewide bicycle helmet laws, many of their cities do require one to be worn no matter your age. Head here for the full list. At that point, one might argue the case for a statewide helmet law to reduce confusion. Imagine riding from one city with differing helmet laws to another and getting pulled over without the proper safety gear. 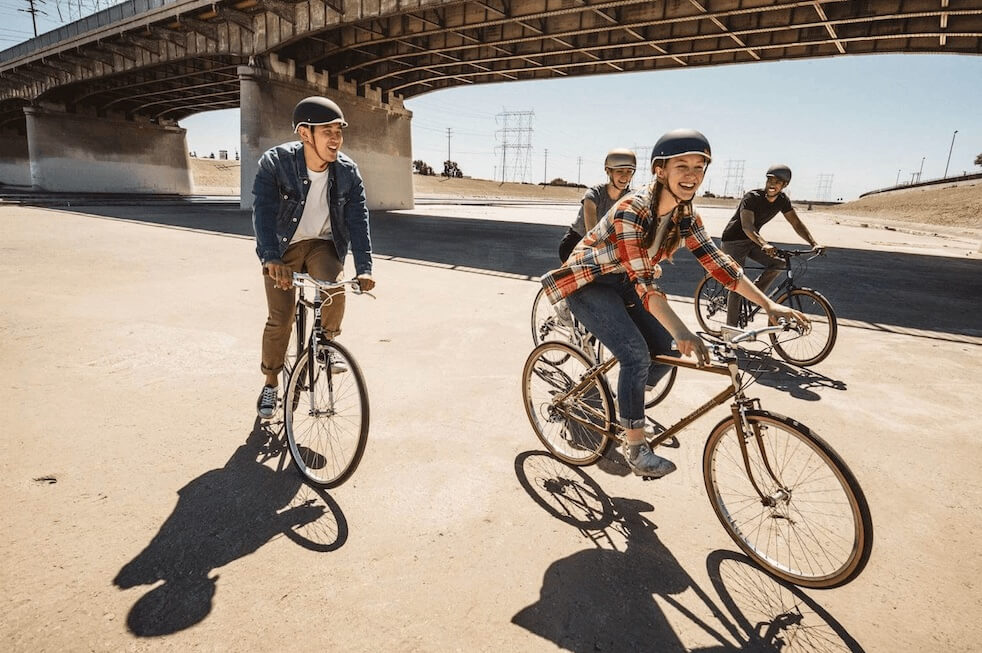 There are 13 states with no bike helmet laws in place.

If we dive a little deeper into why this might be, it could be because imposing mandatory helmet laws has been known to reduce ridership. Many advocates and avid cyclists believe that more riders on the road will make the roads much safer. In this way, drivers of motor vehicles become more cognizant of bicyclists and therefore are better equipped to share the road with their two-wheeled counterparts. That said, if you live in one of these states or are passionate about bicycle advocacy, consider being a voice to help protect the 57 million bicyclists across the U.S.

We know wearing a bike helmet is a personal choice. If you care about your safety and want to protect yourself from life-threatening injury, a well-fitting helmet is your first line of defense. This goes for daily bike commuters, weekend warrior mountain bike trail riders and even those who take a couple of joy rides around the block from time to time. No matter where you fall on that spectrum, or your local helmet laws, we encourage you to protect that noggin.’ You only get one of them after all.

Ready to ride safely? Pick out a new minimalist bike helmet that you can lock up thanks to our integrated PopLock system.